“The liberty of the press is indeed essential to the nature of a free state,” said Herpin, R-Colorado Springs, at a state Capitol news conference. “Every freeman has an undoubted right to lay what sentiments he pleases before the public; to forbid this is to destroy the freedom of the press.”

The news media’s mission “of keeping the public informed” sometimes depends on information provided by confidential sources, the senator elaborated in his own words. “If those sources risk exposure which could cost them their jobs, they will not be as likely to come forward.” 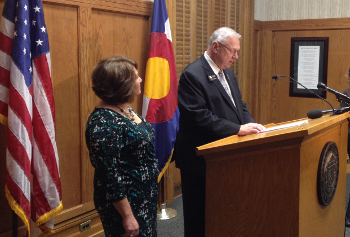 Herpin said he saw the need for SB 14-034, co-sponsored by Rep. Libby Szabo, R-Arvada, while following the ordeal of Fox News reporter Jana Winter last year. The New York-based journalist faced the possibility of jail time for not revealing the names of confidential law enforcement sources who told her about a notebook that Aurora movie theater gunman James Holmes had mailed to his psychiatrist.

Holmes’ attorneys subpoenaed Winter to testify in Colorado, saying the unidentified officers had violated a judge’s gag order. But the New York Court of Appeals ruled Dec. 10 that New York’s shield law protects her from having to give up her sources.

SB 14-034 is scheduled for a hearing in the Senate Judiciary Committee at 1:30 p.m. on Wednesday.

The bill would make Colorado’s journalist shield law more like New York’s reporter privileges, which provide absolute protection when information is conveyed to journalists in confidence. Currently, Colorado journalists can be compelled to testify about their sources if three elements are established by “a preponderance of the evidence”: 1) the information is directly relevant to a substantial issue in a court proceeding; 2) the information cannot be obtained by any other “reasonable means”; and 3) the reason for the subpoena “outweighs” First Amendment interests.

“Confidential sources, under Colorado law, are now treated the same as all other information,” said media law attorney Steve Zansberg, who serves on the Colorado Freedom of Information Coalition’s executive committee. “It’s what is called a qualified privilege, meaning it can be overcome upon the showing of three factors.”

New York “has an absolute privilege,” he said. “It cannot be overcome regardless of … the need of the parties seeking to force a reporter to disclose his or her confidential sources.”

The bill also would make it more difficult to force journalists to disclose unreported information obtained from non-confidential sources.