State lawmakers on Thursday defeated a bill that would have made the State Public Defender’s Office subject to the Colorado Open Records Act (CORA), preferring to let the Colorado Judicial Branch write its own rules for releasing administrative records for that agency and other agencies under its control.

Democrats on the House Judiciary Committee argued that HB 15-1101 unfairly targeted two judicial branch offices – the public defender and the Office of Alternate Defense Counsel – that represent indigent people. Killing the measure on a 7-6 party-line vote, they noted that a judicial branch panel is working on new access rules for the entire judicial department, eventually to be approved by the Colorado Supreme Court.

“These are the real experts…,” said Rep. Pete Lee, D-Colorado Springs. “I’d be interested to have their studied, analytical look at it.”

Even then, however, the public defender and the rest of the judicial branch will not have to abide by rules governing public records that now apply to other state agencies, rules written by the legislature and followed by the Colorado Attorney General and district attorneys’ offices around the state. That’s because the Colorado Court of Appeals in 2012 exempted the judicial department from CORA in Gleason v. Judicial Watch, affirming a previous ruling by the state Supreme Court. 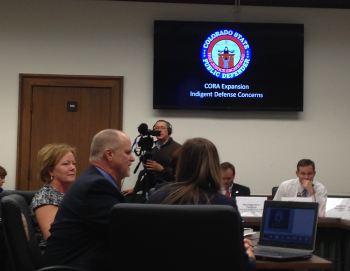 At the heart of the matter, although barely mentioned by the bill’s bipartisan sponsors Thursday, are public spending records in the case against admitted Aurora movie theater shooter James Holmes.

Reporters such as KUSA-TV’s Chris Vanderveen have repeatedly asked Colorado Public Defender Doug Wilson for records showing how much his office has spent to keep Holmes from the death penalty. Arapahoe County DA George Brauchler, who is pursuing the death case against Holmes, has voluntarily released his expenditure records in the case.

Wilson gave the judiciary committee three reasons why he has rejected multiple requests for information on Holmes case expenditures: 1) the Gleason decision, 2) a gag order that prohibits him from discussing the case and 3) ethical rules for lawyers that prohibit him from revealing client information.

Because of those ethical rules, Wilson said, “If there was no Gleason case, if there was no gag order, if we were under CORA today, I would still be denying requests as they relate to individual cases.”

Wilson added that subjecting his office to CORA would open it up to lawsuits over the denial of records, potentially costing “a lot of money if I’m wrong” and must pay requesters’ attorney fees. He noted that prosecutors, under the Colorado Criminal Justice Record Act, would have greater leeway to deny records.

But El Paso County DA Dan May argued that CORA is “the best place” for the public defender’s records because the law exempts records protected by Supreme Court rules, meaning it already prohibits the release of privileged information.

While some members of the committee, including Rep. Joe Salazar, D-Thornton, said they were concerned the bill unfairly focused on two offices that defend poor people, Rep. Paul Lundeen said it is in everyone’s best interest to make sure the public defender’s office is properly spending taxpayer dollars.

“Is this an assault on two specific agencies and, therefore, indirectly an assault on poor people? I would say quite the contrary,” the Colorado Springs Republican said. “…We need to make sure, by virtue of our analysis as a society of how this department is operating, whether or not it is doing an effective job of looking out for those people who are least able to look out for themselves.”

CFOIC President Steve Zansberg testified in favor of the bill’s concept as attorney for the Colorado Press Association and the Colorado Broadcasters Association. But he cautioned that the bill, without an amendment, would have substantially broadened what is now a narrowly defined provision in CORA that exempts attorney-client communications and attorney work product.

Sunshine Week panel: How to get your hands on public records