A month after a new statewide cap on public records fees went into effect, many governments and agencies in Colorado have adjusted their records policies – or have posted policies for the first time – to comply with the revised statute.

But many others have yet to post policies or fee schedules that meet the requirements of HB 14-1193, even though the bill was signed by the governor in early May, a review of state and local government websites shows.

Some governments raised their hourly rates after previously charging less than the new law’s maximum.

As of July 1, local and state governmental entities in Colorado are allowed to charge no more than $30 per hour – with the first hour free – to research and compile information available to the public under the Colorado Open Records Act (CORA). They aren’t allowed to charge research fees without first publishing their fee policies on the Internet or in some other form. 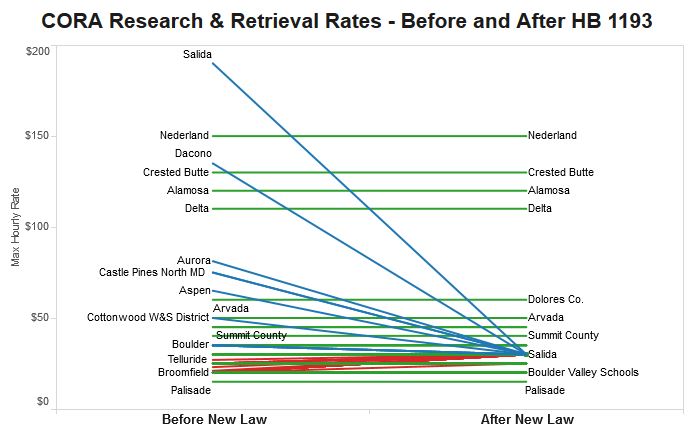 Click on the image for an interactive graphic on CORA research-and-retrieval rates.

The new law is working as intended to significantly lower research-and-retrieval costs in some jurisdictions, such as Aurora and Salida, which previously posted fees well above the new maximum rate.

It also has forced some governmental entities to replace vague or non-specific fee policies so that records requestors now know exactly what they will pay. Lakewood’s policy, for example, no longer says that charges will be “based on hourly rate, including benefits, of the least technically trained person capable” of performing the research.

Many governments that had charged for the first minute of research now must provide the first 60 minutes at no cost to the requestor, and they have amended their policies to reflect that requirement. But some also raised their rates in the process. And some that previously gave away the first hour, but charged less than the maximum rate thereafter, now charge $30 per hour for that additional time or have reserved the right to do so.

“When we saw the new legislation, we took the opportunity to look at how we were handling open records,” she said. It became apparent that “the cost to retrieve records actually exceeded what we charged. That’s the reason (for the increase).”

On Monday, the city of Arvada’s website still showed research rates of $25 per hour with the first 30 minutes free and $50 per hour, billed in 15-minute increments, if a request needs legal review. City communications manager Maria Vanderkolk said the no-charge period would be changed to one hour after the Colorado Freedom of Information Coalition pointed out the inconsistency with the new law.

She was still checking late Monday as to whether the city would lower the $50-per-hour charge for legal review. CFOIC President Steve Zansberg, a First Amendment attorney, has said that reviewing requested records for matters of attorney-client privilege, or other legal issues that could make them off limits to the public, is part of the job for lawyers who represent government bodies “so those fees should not be charged to the citizen.”

“Under an interpretation that says those services are part of research and retrieval,” Zansberg added, the new law makes it clear that the public can’t be charged more than $30 an hour and the first hour must be free.

The Colorado Attorney General’s office recently adopted a CORA policy that explicitly caps its rate for legal research. The policy says requestors will be “charged $30 an hour for time spent by an agency attorney engaged in the practice of law directly related to a records request, including but not limited to, the review of documents for privilege or exemptions to production; document redaction; creation of documents that articulate the privileged nature of the requested documents; or conducting Colorado Open Records Act-related legal research.”

CFOIC looked at the CORA fee policies of more than 100 Colorado governments and agencies, before and after the law went into effect July 1. Click on the image above or go here for an interactive graphic on CORA research rates.

Zansberg explained the new law in this six-minute video: