A few years ago, when the small Weld County town of Platteville looked into providing searchable videos of town board meetings on its website, the estimated cost was several thousands of dollars.

“We could fill some potholes with that,” said town clerk Mary Lee. “We don’t have a budget for it.”

Since May, however, Platteville’s website has featured a “Meetings on Demand” section where anyone can find trustee and planning commission videos linked to a meeting’s agenda. Click on an agenda item and you’ll go directly to a clip from that portion of the meeting. 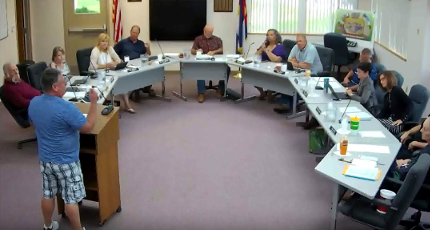 Platteville board of trustees meeting, June 6, 2017 (town of Platteville website)

The technology is similar to what you’ll find on many other local government websites in Colorado. But Platteville, population 2,600, paid nothing for it.

The nonprofit Open Media Foundation provided the software for free. It’s free for all small local governments (population 5,000 or less), most of which likely can’t afford commercial versions.

Called the Open Media Project, the “transparency portal” software is based on technology the Open Media Foundation developed a decade ago for The Colorado Channel, which livestreams floor action during Colorado legislative sessions and provides the public with searchable video and audio archives of those proceedings.

Tony Shawcross, founder and executive director of the Denver-based Open Media Foundation, contends that governments at all levels should use technology to help citizens stay engaged, “and we don’t want price to be a barrier.”

“Most businesses have found ways to meet consumers where they’re at, and our governments need to do the same,” he said. “If people are forced to go down to city hall every time they want to engage with local government, that’s an impediment to participation.”

There was a time when a local cable TV channel aired Platteville board meetings, Lee said, but the cable company stopped serving the area years ago. Although the town hasn’t done much yet to publicize the new online video service, she expects it to be popular once more residents hear about it.

“Our citizens want to know what’s going on, like they do everywhere else,” Lee said, predicting the searchable videos will appeal to “seniors, especially, who like to watch the meetings but don’t get out much at night anymore.”

Platteville’s only costs involved the installation of a board room camera and the modification of a microphone, she said.

Since the free software was released in April, Platteville is so far the only small community to deploy it and make the videos public, but “several more” are trying it out, Shawcross said. About a dozen bigger governments, including Thornton and one in Oregon, are paying for a version of the software at an annual cost tied to population. The Colorado Supreme Court and the Colorado Court of Appeals also use the technology to post videos of certain proceedings.

Shawcross said the foundation is able to provide the software for free or at low cost because grants covered the cost of research and development, and the system leverages YouTube, which displays and stores the video footage at no charge. The Open Media Foundation’s software organizes the data files.

The software is capable of providing transcriptions too, but that feature hasn’t been activated yet for some sites, including the Colorado Channel. The Open Media Foundation also has developed a prototype that can link a legislator’s voting history to searchable video clips. Shawcross hopes to present that feature to the Colorado Channel Authority Board later this year and integrate it with Open States, a 50-state legislative vote-data site previously run by the Sunlight Foundation.

Another future possibility: Video streaming and archiving of Colorado legislative committee hearings, only the audio of which is now recorded.

“We’re working on that,” Shawcross said.