Journalists must “double down on the public trust” and governments must “release their stranglehold on information about the public’s business,” former Denver Post Editor Greg Moore said Wednesday, accepting an award from the Colorado Freedom of Information Coalition.

“Mendacity and suspicion divide us,” Moore told a luncheon gathering in downtown Denver. “We need a common set of facts that we can agree on so that we can have a healthy debate about solving the big problems we face.

“We need more openness, not less.” 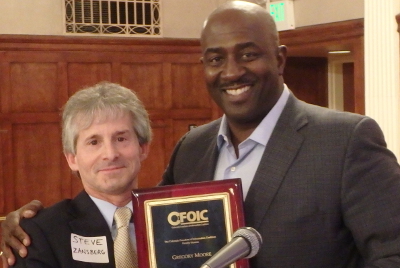 The CFOIC presented Moore, 62, with its Jean Otto Friend of Freedom Award, which recognizes a person for sustained and/or significant contributions to open government and First Amendment causes in Colorado. The award honors the legacy of Jean Otto, a long-time editor at the Rocky Mountain News who founded the CFOIC in 1987.

During his 14 years as editor of The Post, the newspaper won four Pulitzer Prizes, most recently for its coverage of the 2012 Aurora movie theater shooting. At Moore’s insistence, CFOIC President Steve Zansberg said, The Post led the media consortium assembled to seek maximum access to the court case. It was the only news organization to seek copies of notes kept by the killer’s psychiatrist – notes shown to the jury but not to the public.

Zansberg, a media attorney who represents The Post, noted that the newspaper under Moore also won a six-year battle for the release of more than 900 pages of documents seized from the homes of Columbines killers Dylan Klebold and Eric Harris. The Colorado Supreme Court ruling, Zansberg said, established an important precedent, “that when the government confiscates and reviews private writings, they thereby become public records to which we the people have a presumptive right of access.”

Zansberg said Moore “refused to take no for an answer” when then-Gov. Bill Ritter refused to turn over records documenting the cell phone calls he made in his official capacity as governor. “Greg directed us to challenge that to the ends of the earth,” he said, not because the newspaper thought the records contained something nefarious but to stand up “for an important principle that the state’s highest-ranking elected official should not be allowed to keep from public scrutiny the records that reflect and memorialize the official conduct of government.”

The Post lost the case in the Colorado Supreme Court. “Sadly, only two of the justices agreed with us …,” Zansberg said. “The other four, with all due deference, got it wrong. They ruled that the governor had not made those records in his official capacity. The telephone company had made those records. Apparently, Gov. Ritter played no part in that process.”

Even as the newsroom budget shrank over the past few years, Moore said The Post continued to fight for “openness and the public’s right to know.”

“It probably was one area where if we went over budget, we didn’t get grilled. Everybody seemed to understand that access to public records was at the heart of our public trust. It was our institutional power versus their institutional power, and we never shrank from that challenge and I hope we never do.”

New Post Editor Lee Ann Colacioppo said Moore left a legacy in the newsroom that fighting for access to government information is “a core value … a basic principle.”

Moore said “we all have something at stake when the government reflexively denies access to documents that should be available to the public,” and he noted that it’s become harder in Colorado for journalists and the public to find out how government decisions are made and tax dollars are spent.

“In too many cases, fees to inspect records are astronomical,” he said. “It’s a form of intimidation, especially for the average citizen.”

Moore said the current federal administration’s penchant for secrecy has trickled down to states, cities and counties. “And while President Obama is leaving in a couple of months, things are not going to get any easier. I guarantee you.

“We may be on the threshold of an all-out war when it comes to public access,” Moore said. “We need to do a better job of making the public aware of what’s at stake.”

Moore, who left The Post earlier this year, is teaching this semester at the University of Colorado Boulder. His seminar is called “Deadlines and Disruptions: New Issues in the News.”