An individual’s breathalyzer results “will still be in police reports,” said Sen. John Cooke, the Weld County Republican who introduced SB 16-132. “When someone gets arrested, everything will be in there, just as it has been. And it will always be in court documents, obviously.” 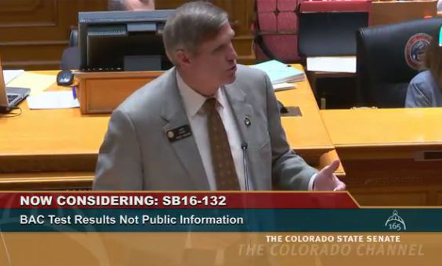 What won’t be available under the bill is the entire breathalyzer database kept by the Colorado Department of Public Health and Environment (CDPHE).

Although some of the data will remain a public record, personally identifying portions will not available for public inspection under the Colorado Open Records Act. That information will be available only to the person arrested for driving under the influence and his or her attorney, as well as prosecutors and law enforcement authorities.

Cooke said he wants to protect peoples’ privacy from “ambulance chasers” who want everybody’s breathalyzer information. Results of blood-alcohol tests are kept in a separate Colorado Department of Public Safety database that is not public.

SB 16-132 won final approval in the Colorado House on Wednesday morning. During committee testimony on the bill in February, health department officials said it costs thousands of dollars in staff time and legal costs to fight open-records requests and subpoenas for the database.

In FY 2015, the state Attorney General’s office spent $72,000 defending the department’s refusal to provide the database, said Ann Hause, the health department’s director of legal and regulatory compliance. The AG spent another $43,000 fighting subpoenas for it.

“For one small program, this is an inordinate amount of legal costs,” Hause said.

Defense attorney Abraham Hutt testified against the bill. He said lawyers need access to information showing how breathalyzer instruments perform and whether problems can be traced to certain law enforcement officers or departments.

The bill was amended on the House floor to still allow access to portions of the database that would let someone analyze the pass/fail rate of an instrument and usage by a particular officer.