A bill that caps research-and-retrieval fees for public records at $30 per hour passed the Colorado Senate on Tuesday with an amendment requiring that costs be the same for everyone.

HB 14-1193, which was approved on a 32-2 vote, now heads back to the House for consideration of Senate changes.

The measure, as it stands, also prohibits the state and local governments from charging for public records without first publishing their fee policies on the Internet or in some other form. The first hour of research must be free, and the $30-per-hour maximum rate would be adjusted for inflation every five years.

The new amendment says that fees charged to research and compile public records must be equal for all requesters, whether they are individuals, media representatives, public or private entities or for-profit or non-profit entities.

Sen. Ted Harvey, R-Highlands Ranch, cited testimony from last week’s committee hearing that a county had charged requesters different fees for the same information because a county employee “liked one of the parties but didn’t like one of the other parties. 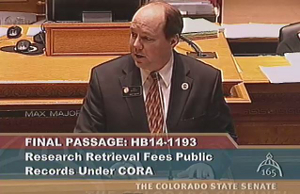 “I think we can all imagine how a frustrated government employee might do that, and that’s totally and completely inappropriate,” Harvey said. “This amendment … makes sure that we are treating all citizens alike whether you like them or not.”

The Colorado Open Records Act (CORA) currently says nothing about research-and-retrieval fees, but it does specify that charges for copying computerized records may be waived or reduced for public agencies, nonprofits, journalists and academics.

Greg Romberg, lobbyist for the Colorado Press Association, said he is studying the amendment to make sure it wouldn’t disadvantage members of the news media who ask for public information. The press association has supported the previous versions of HB 14-1193.

The Senate on Tuesday also passed HB 14-1047, which would make it illegal to obtain a booking photo with the intention of posting it online and charging a fee to take it down. Doing so would be a misdemeanor punishable by a fine of up to $1,000.

Senate amendments to the bill will now be considered in the House.