Was the Arvada City Council aware of a 2012 state statute that outlaws the use of secret ballots to make decisions when it voted four times Jan. 10, on anonymous folded sheets of paper, to eliminate candidates for a vacant council seat?

Yes, according to city spokeswoman Jill McGranahan. But the council did not violate the law, she said, because the final unanimous vote for new council member Jerry Marks was “the official action of the city council and was voted on publicly.” The check-marked votes on unsigned pieces of paper “were not official and were part of the discussion process,” McGranahan said.

An Arvada resident who sued the city this week claims that the votes were improper, and he wants Marks’ appointment invalidated.

The Jan. 10 special meeting of the Arvada council was called to hear from candidates for the District 1 seat of Rachel Zenzinger, who resigned after being appointed to replace Democrat Evie Hudak in the state Senate.

The meeting agenda lists “Voting by Secret Ballot” as one of the agenda items. 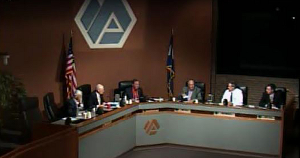 In a video of the meeting, available on the city’s website, Mayor Marc Williams explains that, during each round of balloting, “we will each be marking with a check mark so that no one will ever know which one of us were X’s or O’s or some other form of marking.”

“If there is one council candidate who receives four or more initial votes, that will be our new council member and then we will entertain a motion from someone on the sitting council to appoint that individual for … that portion of the unexpired term of Rachel Zenzinger,” the mayor said during the meeting. “If we do not have four votes in that initial ballot, we will eliminate from further consideration any candidates who did not receive any votes in that first vote. Not unlike getting voted off the island but a little bit different.

“So then we will continue on through that process until we hopefully get to one candidate having four votes.”

HB 12-1169, which Gov. John Hickenlooper signed into law on March 24, 2012, prohibits the state or any local public body (such as a city council) from using secret ballots to adopt “any proposed policy, position, resolution, rule, or regulation” or to take “formal action.”

The state legislature enacted the law following a Colorado Court of Appeals ruling that the Fort Morgan City Council did not violate Colorado’s Sunshine Law when it used anonymous written ballots to appoint two council members and a municipal judge in 2009 and 2010. “Holding government bodies to standards that ensure a clear and open process strengthens our democracy and ensures accountability,” the bill’s sponsor, Republican Rep. Bob Gardner of Colorado Springs, said at the time.

“If the allegations of the complaint turn out to be true, there’s no question that the Arvada City Council violated the prohibition on secret ballots. It’s a slam dunk of a case,” said Chris Beall, the attorney who represented businessman Ronald Henderson in the lawsuit against the Fort Morgan council. “The fact that the council engaged in these shenanigans apparently without anyone raising their hand to object at the time is troubling.”

McGranahan said, “In accordance with HB 12-1169, all formal actions associated with the process were conducted publicly.”

But Beall said the language of the state statute is broader than just votes on “formal actions” such as the motion to name Marks to the vacant council seat.

“The statute reads, ‘Neither a state nor a local public body may adopt any proposed policy, position, resolution, rule, or regulation or take formal action by secret ballot.’ The city seems to think that the only thing that matters is the final clause,” Beall said.

“The fact that the Colorado General Assembly listed all the other things that also cannot be done by secret ballots with the word ‘or’ means that the ban applies to them all,” he added. “A poll of council members as to their preferences among the various applicants for the vacant seat is fundamentally an adoption of a proposed position or policy as between the various applicants. The final vote was merely an endorsement of the result of the winnowing process that had preceded it.

“The bottom line is that the entire process is subject to the ban on secret ballots.”

CFOIC’s year in review: Transparency highlights and lowlights from 2014