Concerned that some government boards were barring the public from meetings that should have been open, state lawmakers in 2001 enacted major changes to Colorado’s Sunshine Law.

They added, among other new requirements, two prerequisites before officials could shut the door: 1) Cite the statutory subsection authorizing the executive session; and 2) Reveal the particular matter to be discussed “in as much detail as possible without compromising the purpose for which the executive session is authorized.”

The public, the General Assembly decided, is entitled to know something about what their city councils, county commissions and school boards talk about in private meetings.

But how much specificity is required under the law when a government body votes to go into executive session? In two recent court decisions, judges in Jefferson and Eagle counties offered starkly different viewpoints. 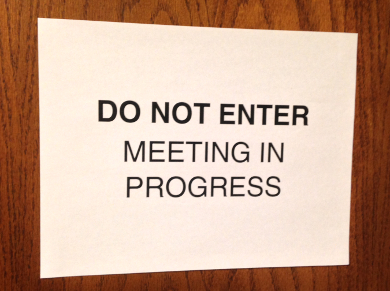 In a Dec. 21 order, Jeffco District Court Judge Jeffrey Pilkington seemed to take the 2001 language literally in ruling that a Jefferson County charter school board violated the Open Meetings Law (aka the Sunshine Law) in two instances. The topic for one of the charter board’s executive sessions simply was listed as “investigation.” That one-word description wasn’t sufficient, Pilkington determined.

“The board did not include the particular matter to be discussed and did not strictly comply with the requirements for convening an executive session,” the judge wrote. The charter board, he noted, “attempts to excuse its obligations by arguing that this session concerned … misconduct by a teacher and the board feared the identity of the teacher would become public.”

But the board could have used “any number of descriptions,” Pilkington contended, and not comprised the purpose of the executive session. Using the words “investigation of teacher misconduct” may have been sufficient, he wrote.

Earlier this week, Granger ruled primarily in favor of Basalt in a lawsuit alleging that the town council violated the Open Meetings Law by improperly calling executive sessions. In announcing a closed-door meeting last April, the council cited the statutory subsections but described the topics using only language from those subsections. One example: “Personnel matters in accordance with C.R.S. 24-6-402(4)(f).”

That was enough information for the public, Granger determined.

In his order, Granger contended that “strict compliance” with the Sunshine Law’s topic-specificity requirements for executive sessions is “impossible.” He questioned “how any municipality could ever phrase a motion for an executive session ‘in as much detail as possible?’”

“Any attorney or plaintiff in court with the benefit of hindsight could always find some ‘possible’ way to further identify the particular matter,” Granger wrote. “Thus, since it would always be possible to find some way to further describe the particular matter, the exception would be rendered meaningless if a strict construction of the (plain) language is employed.”

Which judge is correct?

The Colorado Court of Appeals has held, in three separate cases, that when a public body fails to “strictly” comply with the topic announcement requirements, an executive session is illegal and the recording should be made available for public inspection.

In one of those cases, Worldwest LLC v. Steamboat Springs Sch. Dist. RE-2 Bd. of Educ. (2009), the appellate court ruled that the Steamboat Springs School District was deficient in using the words “personnel matters involving access to information” to describe a closed-door meeting. The district did not indicate that the discussion involved the superintendent’s performance and the results of a survey.

“It would not have compromised the purpose of the executive session to go into that amount of detail,” the court concluded.

Granger, in his Basalt ruling, called the plaintiff’s reliance on the Worldwest decision “misplaced.” He noted that the decision is unpublished and, therefore, not binding precedent. He also wrote that the Basalt case is different because the town risked the possibility that Scanlon “would contend that his right to privacy would be compromised” if his employment was listed as the executive session topic.

The plaintiff in the Basalt case, Ted Guy, hasn’t yet said whether he plans to appeal Granger’s decision.