An attorney for the Jefferson County Education Association argued Wednesday that a district court judge erred in ruling that teacher sick-leave records can be disclosed to the public.

The lower-court judge made the personnel exemption in the Colorado Open Records Act (CORA) “an empty shell” when she narrowly defined confidential records to include only a public employee’s “personal” information, JCEA lawyer Sharyn Dreyer told a three-judge panel of the Colorado Court of Appeals. 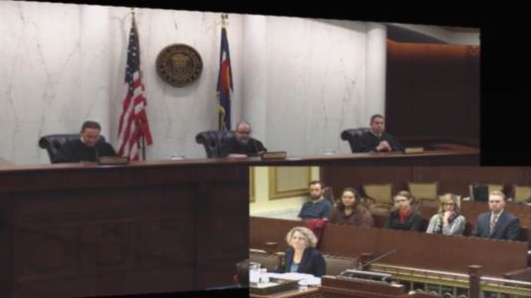 Attorney Sharyn Dreyer argues on behalf of the Jefferson County teachers’ union before a three-judge panel of the Colorado Court of Appeals.

Interpreting CORA in this way would protect from disclosure “maybe one or two pieces of paper in an entire multi-volume personnel file,” Dreyer said during oral arguments. “It must be presumed that the legislature intended to create a genuine exemption that actually provides some meaningful protection for personnel records.”

But Stu Stuller, attorney for the Jefferson County school district, noted that governments in Colorado rely on a 1998 Colorado Court of Appeals decision for guidance on releasing employee personnel records. That decision, in Daniels v. City of Commerce City, interpreted CORA as exempting from disclosure only personnel information “of the same general nature as an employee’s home address and telephone number or personal financial information.”

The sick-leave records at issue in the Jeffco case are “precisely the kind of information that the CORA was adopted to disclose,” Stuller said. “It’s somebody using a public benefit – sick leave is a public benefit – to make a political statement.”

The teacher’s union went to court last February to prevent the release of the names of teachers at four high schools who called in sick in September 2014 in an apparent protest against school board policies. Classes were canceled because so many teachers used sick leave, prompting some parents to request the names of the teachers who were absent.

Although the union lost at the district court level, the bulk of the teachers’ names still haven’t been released while the case is on appeal.

The CFOIC, Colorado Press Association, Colorado Broadcasters Association, The Denver Post and the Associated Press submitted a friend-of-the-court brief in the case. The school district should be allowed to release the teachers’ names, the consortium contends, “because the public has a compelling interest in being able to monitor the performance (or, as here, non-performance) of public employees’ public functions and the expenditure of public funds.”

The three-judge panel of the Court of Appeals didn’t say when a ruling would be issued.

Database records bill dies, but stakeholders hope to work on a compromise

A $6,750 deposit to search the city clerk’s emails? Records retention an issue for small governments