A bill to increase legal protections for Colorado journalists and their sources died in a state Senate committee Monday, despite passage of an amendment that significantly weakened the original proposal.

The Senate Judiciary Committee also killed another measure, SB 14-070, that would have opened records kept by private associations of elected officials that get some of their money from public sources.

“I’m not convinced yet that there is a problem significant enough for us to make this somewhat significant change,” said Sen. Michael Johnston, D-Denver, of SB 14-034, the reporter’s shield bill. “And not having seen examples where we have actual press members from Colorado that were affected by this, it seems to me we have a good common-sense balance right now with the shield.”

Sen. Bernie Herpin, R-Colorado Springs, decided to sponsor the shield bill while following the ordeal of Fox News reporter Jana Winter last year. The New York-based journalist faced the possibility of jail time for not revealing the names of confidential law enforcement sources who told her about a notebook that Aurora movie theater gunman James Holmes had mailed to his psychiatrist.

As originally proposed, the legislation would have provided Colorado journalists with absolute protections against being compelled to reveal confidential sources and unreported information. The amendment that passed before the bill itself failed on a 2-3 vote removed those absolute protections, which concerned both prosecutors and defense attorneys. It still would have raised the standard by which members of the news media in Colorado could be forced to testify about their reporting.

Sen. Linda Newell, D-Littleton, said she likes the intent of Herpin’s proposal but believes it ought to include “a bigger conversation” regarding the definition of a news person.

SB 14-070 lost on a 1-4 vote with only its sponsor, Sen. Kevin Lundberg, voting yes. The Berthoud Republican wanted to amend the Colorado Open Records Act to include records maintained by private associations that have memberships consisting primarily of state or local elected officials and collect at least 10 percent of their annual revenues from “public moneys.” 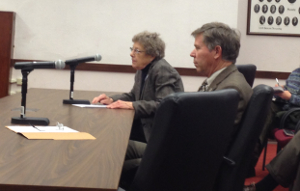 “This is addressing a hole in the current CORA process,” Lundberg said, noting that elected officials are subject to the open-records law in their own jurisdictions but not when they are brought together in associations.

But Sen. Steve King, R-Grand Junction, said he would worry about “very serious” unintended consequences if the bill became law, such as whether it made the training manuals of sheriff’s departments subject to open-records requests.

“I just think there are so many things involved in this, that it creates so many questions,” King said. “It is great for debate. I’m not so sure it’s great for legislation.”