State lawmakers Wednesday advanced a bill that would make it easier to seal the records of marijuana crimes now legal in Colorado under Amendment 64.

During a lengthy hearing in the Senate Judiciary Committee, SB 14-218 ran into strong opposition from prosecutors worried that it would let people hide felony drug convictions.

But an amendment to the bill clarified that it would only allow the sealing of misdemeanors involving possession of small amounts of pot or up to six plants for personal use. Another revision adopted by the committee would let local district attorneys review court petitions before a record is sealed.

The sponsors of SB 14-218 said the bill is intended to help people who have trouble getting jobs, loans and housing because their records reveal minor marijuana convictions. 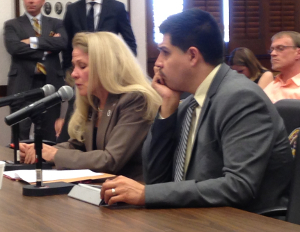 “What was previously an offense, now the voters of the state have said is no longer an offense,” said Sen. Jessie Ulibarri, D-Westminster, who is sponsoring the bill with Sen. Vicki Marble, R-Fort Collins. “There should be the ability to seal to prevent collateral consequences from what is now a legal activity.”

The committee voted 3-2 to send the measure to the Senate Appropriations Committee. Sen. Linda Newell, D-Littleton, objected, suggesting that lawmakers study the idea over the summer.

“This is important,” Newell said. “We need to get this right.”

In a flurry of other legislative activity Wednesday:

The Senate voted 25-10 for a bill intended to give the public more information – and more chances to comment – on large public-private transportation projects.

SB 14-197 is in response to public outcry over the handling of the Boulder Turnpike toll-lane expansion project. Residents complained that they didn’t find out about key details of a 50-year agreement between the Colorado Department of Transportation and an Australian-based company until the project’s final planning stages.

“I think we all agree that people need to know what’s happening with their roads and not have surprises,” said Sen. Matt Jones, D-Louisville, a sponsor of SB14-197. “That’s particularly true with these public private partnerships that have long terms and big costs.”

The Senate gave preliminary approval to HB 14-1292, the Student Success Act, which includes $3 million for a statewide website that details spending by school districts and individual schools in Colorado. More details from Chalkbeat Colorado.

The House, meanwhile, passed SB 14-182 on second reading. It is a revived version of an unsuccessful bill to require the electronic recording of all portions of school board executive sessions. The new proposal just requires that executive session minutes reflect the amount of time spent discussing each topic, in addition to a broad description of each topic as required under current law.

SB 14-217 was sent to the Senate Appropriations Committee by the Senate Committee on State, Veterans & Military Affairs. The bill would establish new disclosure rules for lobbyists, including a requirement that professional lobbyists list other lobbyists they work for as subcontractors.